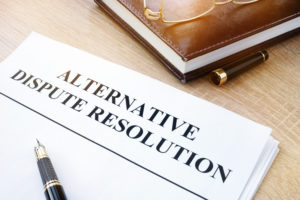 Going through a divorce, even if you are convinced it is the right decision, can evoke all sorts of emotions, from grief and sadness to extreme anger. Because divorces are so emotionally charged, the emotional reactions of the couple can get in the way of reaching a fair and satisfactory settlement that allows both parties to move on with their lives.

After all, you have to divide your assets fairly. You also have to arrange for the custody and care-taking of any children and pets. These necessary tasks are hard to do when you are seething with anger or reeling in disbelief.

These types of emotional issues are why it is essential to ask an attorney for help with a divorce. Certainly, you can embark on a DIY divorce, but odds are you won’t like the results, especially if your soon-to-be ex-spouse suddenly decides to seek full custody of the children and conceal assets that you are entitled to half of.

Traditional divorce attorneys approach the marriage breakdown as a battle to be won. Instead of seeking a fair arrangement that suits both parties, they try to get as much as possible for their client. This approach to divorce can lead to the couple developing extremely unpleasant, bitter feelings about each other. This charged emotional atmosphere does not help them move on with their lives or figure out how to cooperate with each other when engaging in childcare.

If you are contemplating divorce but don’t want to engage in an outright battle with your soon-to-be ex-spouse, why not contact New Beginnings Family Law today to discuss a more productive approach to divorce?
<h3=>TYPES OF ALTERNATIVE DISPUTE RESOLUTION FOR FAMILY LAW

Traditional divorces are referred to as “litigation” divorces because a lawsuit is filed to end the marriage. Often the terms of the divorce are argued about in public court and then decided by a judge.

There are many other options available these days to resolve the couple’s disagreements and come to a satisfactory agreement without going through litigation, such as:

We will discuss some of these alternatives below in more detail. Arbitration should generally be your last choice when all other efforts to reach an agreement have failed. In arbitration, a neutral third party makes the decisions about childcare and assets, and the couple agrees beforehand to simply accept whatever settlement the arbitrator comes up with.

In mediation, a neutral mediator talks to both spouses and works with them to find common ground. The goal is to come up with a plan to split assets and arrange for childcare that is satisfactory to both parties.

The mediator is usually an experienced family law attorney who has received additional training in conflict resolution. One key to successful mediation is that the mediator has to be completely neutral and not favor one spouse over the other.

Mediation can be an especially helpful approach if there are children involved. Angry, bitter ex-spouses who go through a traditional divorce tend to have trouble letting go of these feelings during co-parenting efforts.

Other advantages to mediation include:

There are, however, some downsides to mediation. Since the process is kept private and doesn’t involve the courts until after an agreement is reached, it is possible for one spouse to hide assets from the other.

It is also possible for one spouse to intimidate the other spouse into not actually expressing their true feelings and desires. This can be a real problem if one spouse was abusive or dominant during the marriage. A good mediator should, however, be able to recognize this issue and take steps to prevent this kind of silent bullying.

Each party first meets with their own attorney to discuss their needs and wants. Then, everyone meets together to develop a settlement that both parties can agree to. This approach is similar to mediation, except that in a collaborative divorce, each spouse has an advocate: the attorney, whose role is to protect their client’s interests. This can be a real advantage if one spouse has a tendency to intimidate or dominate the other spouse.

Like mediation, collaborative divorce only works if both spouses are interested in coming to a fair settlement everyone can agree on. It is possible for one spouse to hide assets during this process.

In a collaborative divorce, the attorneys may suggest getting a financial planner involved in discussing the terms of the settlement and its implications before drawing up the final divorce papers. Other professionals may be brought in, such as a child advocate to speak for the children, and a therapist to help the couple work through emotional issues.

Christian conciliation is a process similar to mediation, where a neutral third-party works with the couple to help them reach an agreement. In this process, the mediator has been trained in conflict resolution from a religious perspective.

Deeply religious couples may feel more comfortable working with a Christian conciliation mediator because they tend to trust the mediator, who becomes a supportive spiritual guide during the divorce process.

One of the most difficult aspects of any divorce process is deciding what to do with the children. In an ideal world, both parents would put their children’s needs and wants first when making decisions about custody, where the children will live, who will be the primary caregiver, and visitation schedules.

Unfortunately, often the children are simply regarded as assets during the divorce proceedings. For example, one spouse may demand full custody as a bargaining ploy intended to intimidate the other spouse into giving in on other demands about material assets.

In particularly unpleasant litigated divorces, if the judge decides the parents cannot be trusted to come up with a parenting plan that will meet their children’s needs, the judge can order the couple to use a parenting coordinator.

How Could Alternative Dispute Resolutions Help My Divorce?

Most divorces are not a mutual agreement to call it quits. In around 80% of cases, only one spouse wants to get divorced. The other spouse often feels betrayed and angry. The spouse who wants the divorce is often angry as well.

The breakup of a marriage can lead to a complete disruption of both spouse’s lives and their children’s lives. The family home will probably have to be sold. There may be serious financial consequences to the breakup, especially if one spouse provided most of the family’s income.

Traditional divorce attorneys take this emotionally charged and naturally adversarial situation and turn it into an all-out fight, with each attorney seeking to help their client “win.” While “winning” might be good thing in some lawsuits, when it comes to a divorce, particularly if children are involved, “winning” is actually “losing” because of the anger and bitterness that are generated during the process.

In addition, if a traditional divorce process actually ends up in a court without having come to an agreement about childcare and divisions of assets, the judge is going to be the one making the final decisions about what happens. It is unlikely that either spouse will be happy with the judge’s decisions.

Turning to an alternative dispute resolution process is often the only way to “win” when it comes to a divorce.

Our preferred approach is to talk to both parties and see if an alternative dispute resolution pathway would be acceptable since we believe that divorces can be handled without conflict and without turning a family’s life into a civil war. We can provide advice about which method to turn to, and support our clients throughout the process.

If you are considering divorce, or your spouse has asked you for a divorce, contact the experienced and compassionate Huntsville divorce attorneys of New Beginnings Family Law right away. We are experienced in all aspects of family law. We can support your efforts to get through this difficult time in your life and help you start the next phase of your life.